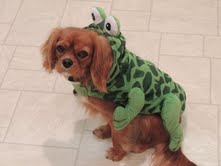 I can’t be a Princess!  Dad called me a “hot dog” lots of times during the summer, but when I tried on the hot dog costume – the small was too small, and the medium was too big?  (Guess I’m between sizes?)  You know how good I look in green, and I like frogs (one of my first toys – from Bailey, was a frog) so that is my costume!  I don’t mind a frog on my back – it’s better than a monkey!

I have been wearing it around for a few days (it’s too cute to just wear once).  I have been laughed at, and Jon called me “Frog Dog”, but I like it!  My ears didn’t fit in the ear openings, so Mom pinned the top back and it makes the eyes stand up!

When we went to my favorite store, several people thought I was soooo cute.  I didn’t feel embarrassed, but you should have seen the Cavalier I met?  Dad thought he was a Tricolor but he was really a Blenheim!  Have you ever seen an orange and black stripe Blenheim with a Mohawk?  (The Mohawk was fake!)  I didn’t catch his name, but that was his costume!  He came to have his picture taken (with his family) and take part in the costume parade!

I also met a Great Dane!  I saw one before, but it was brown, this guy was black and white – he looked more like a big Dalmatian than a Great Dane?  Of course, the owners always say the same thing “he likes other dogs, and he is very friendly”.  Well I didn’t take any chances, I stayed back (behind Dad), in case he changed his mind and DIDN’T like ME!

I had my picture taken, but you can’t see the bats and pumpkins on the background because I was lying on the floor.  Mom and Dad didn’t hold me for the picture.  (They weren’t dressed for the occasion?)  I got a gift, for having my picture taken?  There was a package of cookies, (pumpkins, of course) a new black and orange ball with a pumpkin on it, and a new frizbee!  I don’t have a regular size frizbee – boy is it hard to hang on to!  My little soft one, I can pick up in the middle, guess I’ll need more practice?  If it doesn’t quit raining, I will never get a chance to go out and play with it!

I’m in trouble already – or again!  The TV ads for Christmas have started already and there is a big white dog with a red circle around his eye that has started bugging me!  I can tell he is coming when I hear the music – Mom can’t figure out how I know what music brings him on?  She doesn’t pay much attention to TV – it may be ME she needs to pay more attention to, then I wouldn’t be watching commercials – that make me bark!  I’m trying to keep my barking under control.  ( I can’t watch Animal Planet anymore!