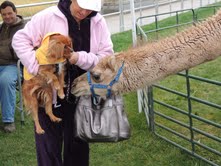 You are here: Home / Ruby's Journal / The Petting Zoo

I wanted to share some more of my visit to the Petting Zoo.  In the first area there were two camels.  I don’t know if they were a Dromedary (one hump) or a Bactrian (two humps)?  I couldn’t see any humps, (maybe they are babies and don’t have their humps yet?)  so where do they store the water?  Well, the humps really don’t store water – they are reservoirs of fatty tissue?  Who needs more fat storage?

The worst habit of camels is “spitting”?  They spit when they are distressed.  I didn’t want to stress them out!  Most of the people had food for them, but when they came close to me I didn’t want them to think “I” was the food!!  They spit during feeding – just to show who is boss – and it isn’t real smelly.  BUT, if they spit when they are angry, frustrated, or spooked a stream comes from their first stomach chamber that REALLY smells!

The smaller animals in the next area came to the fence and I didn’t want to get too close to them.  I guess they were goats, but they had different horns, different colors, and one even had curly hair?  I stayed long enough for Dad to take my picture with them, (Mom was holding me because I was shaking.) and when they realized I didn’t have any food for them, they moved on!

What is the difference between a “chick” and a “chickadee”?  FIVE FEET!

We went to the Farm Market and there were red chickens (like Aunt Laurie’s) all over the parking lot?  I felt real brave (in the car), so I gave a shout out to them?  They didn’t seem to hear me because they didn’t run away.  Mom thought maybe she could get a picture of us together, (they are almost the same color as me) but I didn’t WANT to get out of the car!  I did get out, but as I was standing by the car (not wanting to get any closer to the chickens) a woman started coming after them and shooing them back to the house!  SAVED by the owner – I didn’t have to embarrass myself by showing how scared I was of them!

Now, not too many of you have seen a six foot chickadee, right?  I have seen the tiny ones that eat from Dad’s bird feeder.  (He got a new feeder called the “Terminator”?)  Mom chased a six foot chickadee from the sidewalk, through a parking lot, to the store?  I wasn’t sure I wanted to get too close to him either?  Mom held me, and guess what, the big bird petted ME!  I liked him!

At least I don’t have to be afraid of our “turkey”.  He hasn’t made a noise – or moved – since Dad put him in the freezer!